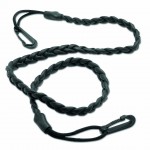 Gruntline is a highly elasticated braided rubber line which can stretch up to 2 meters. Easy to attach on trees, poles, tents, luggage and rucksacks, belts, waist coats / body warmers, in huts & summerhouses, the interiors of cars & wagons & on bicycles.

Ideal as an all-purpose retainer or securing line to tie down items on rucksacks & bags or to fixate baggage & equipment on barrows, as a rucksack strap & a lot more.

Holds up to 9kg of clothing & equipment.

You can hang boilie sacks, bite-alarm receivers, radios, torches, cutlery, clothing, rubbish bags & other equipment of all sizes between the braided bands without the need for pegs or fasteners.

Can be used as an armsling, tie-down and guy line when building a shelter and a lot more!

Just attach between two points using the heavy duty clips or end loops. Then just clamp the item to be hanged between the braid, easy!

Attach one end to belt or vest. Attach other end to item to be secured.

Use caution when removing carabiners that are under tension.

I first came across a similar product to ‘Gruntline’ several years ago in a camping shop and straight away thought what a superb idea, purchased two only to end up rather disappointed that I couldn’t hang from them quite as much as I had anticipated. They were fine for hanging a few lightweight bits but not up to the job of hanging bait out of the way or wet slings and mats etc.

Now skip forward several years to February 2013 and after chatting to Mark Gray who resides in Germany, he mentioned a product that he had been involved in called Gruntline. From what Mark described it sounded like the product I thought I had been buying all those years before. Straight away I was keen to reacquaint myself with the system and in no time at all a package fell through my letter box.

First glance view and they looked spot on. I took one into the garden and attached it to a couple of trees and then started to hang bits on it and boy did it have some grip!

Now to me the Gruntline is very much a multi-function item and since adding some to my kit back in February 2013 they have been used for so many different jobs. I have lashed things down on my barrow with them (much safer than a bungee strap with a hook on the end), hung clothing on them, hung slings and mats away from rodents, dried bait from them and even used one as an emergency belt! Their useful limitations are only really governed by your own imagination.

Back at the end of March I had a trip to France on Island Lake and each swim has a small ‘hut’ with electricity and a fridge and can be used for keeping gear dry and for cooking etc. Now I have always been paranoid about shining lights at night and in such a clear lake as Island Lake and being the first paying guests that year I soon brought the Gruntlines into use for making double thick curtains from my clothes to prevent any light escaping whilst cooking during the evenings.

I could go on and on about the Gruntline but will leave it at that for now. They certainly get the thumbs up from me and yet another item of gear that if I lost one tomorrow I would order another straight away as I would already feel lost without them.

A few months ago a friend sent me a couple of examples of a new product he’d been testing in Germany called Gruntline. What is a Gruntline?

Well, put simply, it’s a platted, elasticated cord with plastic snap hooks at each extremity so it can be hooked to things and to itself.
It is about 120cm in length but can stretch to over 200cm. The instructions say it can hold up to 9kg & it certainly looks very substantial.

Now as an angler; hammock camper and occasional hiker, I make a lot of use of cordage of some description. In most cases it consists of a length of 550 paracord.

I guess at some point we have all strung up a length of cord between two trees to hang, bait, clothes etc to keep them off the ground, due to wet conditions or bugs or rats.
So an article that allows you to do this quickly with no knots seemed like a good idea. On my first outing it rained quite hard during the night so I had an opportunity to test the “Gruntline” during the first night.
I hooked it up between two trees and was able to hang all sorts of things from it. But where it scores; compared to a simple rope ridgeline, is that due to its platted construction and elasticity, you can thread items through it. Thus a bin bag can be kept up off the ground to avoid attracting undesirable creatures. Rather than tie a knot and rip the plastic bag, you just thread it though the platting and it holds in place.
As we packed up, all the stuff we wanted off the ground was suspended. It worked very well. As an angler I can see that hanging a bag/bucket or whatever of bait is also a good way to avoid it getting eaten at night.

But during our camping trip, we also found a couple of other uses which I guess the inventors had yet to discover. While hammock camping I always rig up a tarp. For this I hook up a paracord ridgeline between two trees to drape it over…
On our last trip my son’s ridgeline was too short for the trees available. I tied a loop in his paracord, and snapped in a Gruntline. This then went around the tree and gave us a nice taught ridgeline for his tarp. Another one also made a great guy line to tension the afore mentioned tarp. It was working sort of like a bungee, but due to its platting we could adjust it far more easily.

This was my first outing with the ‘Gruntline’ and already I found a whole host of uses.
As it takes up very little room in a pack, it can simply be carried at all times like any other cordage, yet has many other applications. I’m sure I’ve just scratched the surface as there must be 101 other uses and I will no doubt find many more in trips to come. But just by reading the instructions you can see the many and varied applications. A neat little product!! Highly recommended.

Been playing around with my gruntline over the past few weeks, it’s got loads of uses. I have dried clothing, sacks bait out on it and also wrapped one end around my landing net handle one night attaching the other end to my barrow when the wind got up on a big resi I was fishing. It also doubles up as a great strap on the barrow, need to get hold of a couple more to replace my other bungies on the barrow!

Been playing around with my gruntline over the past few weeks, it’s got loads of uses. I have dried clothing, sacks bait out on it and also wrapped one end around my landing net handle one night attaching the other end to my barrow when the wind got up on a big resi I was fishing. It also doubles up as a great strap on the barrow, need to get hold of a couple more to replace my other bungies on the barrow! 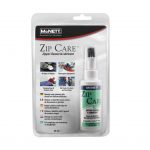 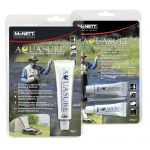 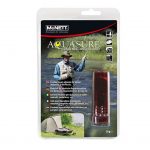